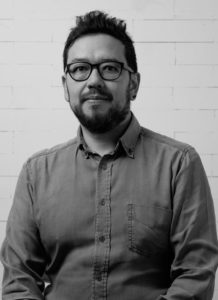 Daniel is the CEO of Sonata Films. Master of Music with emphasis on Sound Engineering from the Pontificia Universidad Javeriana, with a long and well-known trajectory as Sound designer and Sound Director for film and TV audiovisual productions.

In addition to his professional activity, Daniel “El Gato” has over ten years of teaching experience in public and private educational institutions. His pedagogic work has positioned him as a pioneer in sound design teaching and training, which has allowed him to share his knowledge in countless academic scenarios, such as workshops, graduate programs, symposia, festivals, congresses and master classes related to sound art nationwide.

At present, Daniel “El Gato” Garcés has over 50 credits in Cuban, Spanish, American, Estonian, Mexican, Panamanian, Peruvian and Venezuelan film productions. This experience has allowed him to work on all the pre-production, production and post-production processes involved in the sound design art. His work has contributed to the international awards won by many of these productions.