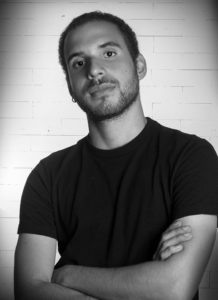 Jose Marulanda is a Composer, Music Editor and Sound Designer at Sonata Films. Master of Music with emphasis on composition graduated from the Universidad del Bosque, experienced in songwriting for web commercials, sound design for mappings, ambient sound staging and editing, as well as sound effects design for feature films and documentaries. As a web commercials composer, Jose created the music for the launch campaign of the new image of Club Colombia beer, the successful web series “Entre panas” which is Poker beer’s advertising, and the web commercials for the renowned brand Gef. José participated in the sound design and songwriting for the mapping “Tendencias Cartagena” (2013). He was the sound designer and composer for the mapping created to launch decorator Andrés Cortés’ first book, and cooperated in the ambient sound composition for the conference given by this successful decorator at the event “Tendencias Cartagena” (2014). Jose worked on the ambient sound staging and editing for feature films such as “Antes del fuego” (2015), “El cartel de la papa”(2015), and the sound effects design for the documentaries “Cañonazo tropical” (2015) and “El rastro de Camilo” (2016).